Explore E4 Youth’s VR Experience of the former Harlem Theater, which stood at the corner of 12th & Salina St.

Instructions [includes audio, best viewed in Firefox via desktop]:
Use the hand cursor to drag the image in any direction. Direct the floating circle cursor over the thumbnails to transition to other 360° images in the gallery. Refresh browser or view in Firefox if audio does not load immediately.

The 360 images used to build the VR environment were captured by Ricardo Villegas and Karina Mata with a Samsung 360 camera, and coded by E4 Producer Victoria Valadez using Glitch. 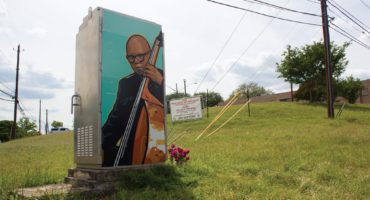