The Victory Grill is a historical restaurant built in 1945 on East 11th Street in Austin, Texas. In the era of segregation in Austin, Victory Grill was a significant destination for African Americans to congregate. It also provided a space for Black veterans returning from World War II to relax when returning home. The venue can fit up to 250 people comfortably, and is the oldest blues venue for African Americans in Austin. In 1998 it was included in the National Register of Historic Places.

Experience the Victory Grill in VR

The venue was not only significant for the eastside community, but for white Austinites, college students, and music lovers of all races. It became a popular spot on the “Chitlin’ Circuit” for blues music in the south in the 1950s. Many famous blue players and singers performed there: James Brown, Ike & Tina Turner, Janis Joplin, and many others.

In the 1960s the venue fell short on business due to desegregation in the U.S. Desegregation, paradoxically, had an adverse effect on East Austin—in creating for greater equality and civil rights, it broke up the bustling cultural district the formerly segregated Black community had built up over decades. Many Blacks began frequenting other places, since they now had more options. Lacking the lively attendance they once had, many East Austin institutions lost their spark or shuttered entirely. 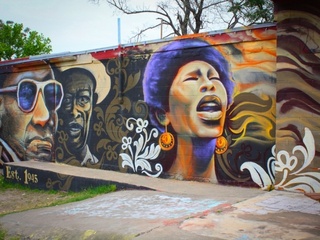 Starting in the ‘70s, the Victory Grill underwent several changes in its ownership and business. It was finally restored in 2005 when the Texas Historical Commission recognized it as a historic landmark, and gave its ownership to a local nonprofit to restore it to its original beauty.

The Victory Grill will always be remembered in East Austin for being a jewel in the community where African Americans have a place to call home. It was the place where generations of Austinites went to relax, enjoy incredible music, and find community.